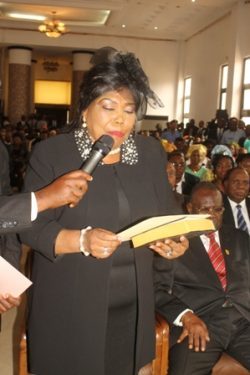 Edo State Governor, His Excellency Mr. Godwin .N. Obaseki on thursday swore in Justice Esohe Frances Ikponmwen as the substantive Chief Judge of the state following the retirement of Hon. Justice C. O. Idahosa who retired on the 25th of January, 2016. Speaking during the ceremony at the Banquet Hall, Government House, Benin City, Mr. Godwin Obaseki said every government must recognise the importance of the Judiciary.

The Governor stated that the laudable achievements recorded during the Adams Oshiomole-led administration were due to the harmony which existed between the Judiciary and the Executive, He therefore urged the Chief Judge to bring to bear her wealth of experience in the discharge of her duties as a highly respected judge in the country.

Obaseki said that her choice as the Chief Judge at a time of great change in the state was remarkable as she “is known to be fair and strict in the dispensation of Justice’’.
He also urged the Chief Judge to sustain and improve the harmonious relationship between Judges in the state.
In her response, the new Chief Judge, Hon Justice E. F.Ikponmwen promised to build on the legacy of her predecessor and enthrone Justice in the state. According to her: “I promise to be hard working, ensure speedy dispensation of justice and stand for the truth; It is the truth that sets one free”.
“There will be no more room for corrupt practices in our judiciary.”
Hon. Justice Ikponmwen was born November 22, 1954. Until her appointment as the Chief Judge of the state, she has been a judge at the state High Court since 1999.